Every camper or hiker needs the best camping cooking pot. What’s a camping cooking pot? Basically, it’s a large metal pot with a lid, also known as a dutch oven. Similar pots in your kitchen might be called braising pans, roasting pans, or dutch ovens. The purpose is to place the pot over a camping fire by using either a campfire tripod or placing the pot on a grill, iron grate or simply laying the dutch oven directly on the fire. Large cooking pots can be used for many things while camping; stews, soups, boiling water or, like in the old west, baked beans. Which dutch ovens are the best? Keep reading for camping cooking pot reviews and ratings!

When checking reviews, note how large the dutch oven is, what it’s made from, if it can be placed directly on the campfire, and if it has a lid and a carrying handle. The half-circle carrying handle attached to the camping pot is what is used to hang the pot over a campfire using a camping tripod. Below are more detailed dutch oven reviews and our top 5 for the camping cooking pots we chose as the best of the best. 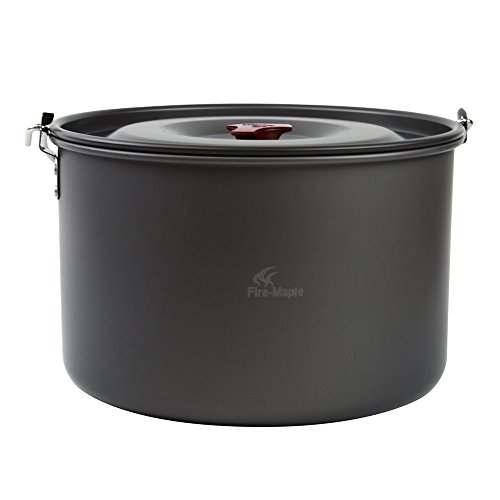 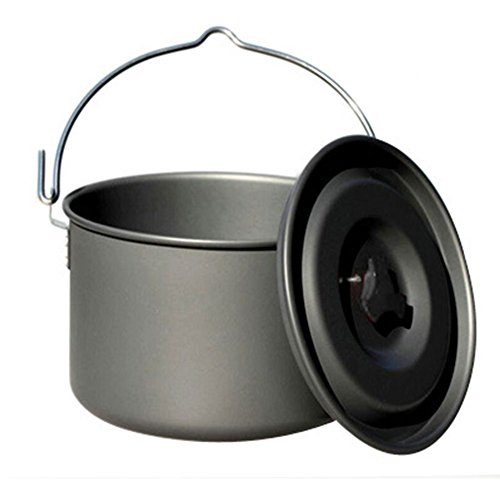 The Camp Chef DO-14 Pre-Seasoned Deluxe Dutch Oven holds up to 12 quarts of liquid, or three gallons. It is the largest camping pot we reviewed – and weighs a very hefty 28 pounds. This camping pot has more “extras” than the others we rated. It comes with a pre-notched area for a thermometer (important when baking in a cast iron baking pan), as well as an over-lid lifter. The lid can also be turned upside down and used as a camping griddle or cast iron skillet. The manufacturer also includes a “starter booklet” with tips and recipes, serving as a beginner cast iron cookbook. Since the Camp Chef Cooking Pot is pre-seasoned, a large size that’s good for large groups, as well as all the little extras, we rate the Camp Chef DO-14 Pre-Seasoned Deluxe 12-Quart 14″ Dutch Oven with Lid our highest ranking of FIVE STARs!

8 QT. DEEP CAMP DUTCH OVEN. The Lodge portable “camp stove” is the pot that does it all. The flanged lid holds hot coals and inverts for use as a griddle. The integral legs allow the oven to sit pe...

This Lodge Seasoned Cast Iron Deep Camp Dutch Oven is the classic camping cooking pot. It holds up to 8 quarts or 2 gallons of liquid. It’s made from iron that has been pre-seasoned. It weighs a hefty 20 pounds. The lid can not only be used as a lid for the backpacking pot, but also could be used to hold hot coals or turned upside down for use as a griddle. The Lodge camping cooking pot is made in the USA and is made by the Lodge Company. Because of its solid construction, being pre-seasoned, and multipurpose lid, we give the Lodge Seasoned Cast Iron Deep Camp Dutch Oven – 12 Inch / 8 Quart our highest rating of FIVE STARS.

EXCELLENT HEAT DISTRIBUTION AND RETENTION: The flat bottom is ideal for use on a fire, stove, cooking grill or in ovens. Any chef knows that this prime model of a small cast iron pot keeps food war...

The Stansport Non-Seasoned Cast Iron Dutch Oven holds 1 quart of liquid (1/4 gallon). It is the smallest camping pot we reviewed. It is made from a heavy cast iron and weighs in at over 4 pounds. Note that this camping pot has no legs – which is great for placing directly on, or directly over, a campfire. Note that unlike the Lodge brand backpacking pot, this cast iron is NOT pre-seasoned. However, because of its smaller size (good for breads, biscuits and smaller portions), and heavy cast iron construction, we give the Stansport Non-Seasoned Cast Iron Dutch Oven, Flat Bottom a good rating of FOUR STARS.

A dutch oven taken to a campsite can be used for many things. A few suggested uses for a camp cooking pot are:

Essentially, you can use a dutch oven with a dutch oven lid lifter for anything you might use a large pot for at home. Be creative and think outside the pot!

What Are Most Camping Cooking Pots Made From?

Camping cooking pots must be made from metal as they are subject to direct flame. The campfire heats the backpacking pot from the bottom, so the metal must be thick enough to take high heat. Therefore, most dutch ovens are made from:

Cast iron is heavier than aluminum. Additionally, since iron will rust, it must either be treated or coated. Coating cast iron with another metal is an option, but most cast iron is seasoned. Quite simply, seasoning cast iron is a way of “baking” or browning a cooking oil onto the cast iron surface. Any cast iron equipment can be seasoned, whether it’s a cast iron wok, cast iron grill pan, or cast iron teapot.

How Much Liquid Can a Camping Cooking Pot Hold?

In addition to how easy cast iron is to clean, an important question before purchasing a camping or backcountry cooking pot or cast iron melting pot is how big is it and how much liquid or product can it hold. Camping cooking pots come in several sizes, but the most common are:

Of course, the carrying capacity when using a dutch oven is dependent on the size of the backpacking pot. In other words, the larger the pot, the more it can hold. And in our reviews, we noted that larger pots often weigh more as well. One of our suggested dutch ovens weighs over 25 pounds! So when looking to buy a cooking pot, not note only its volume but its weight as well.

Many images we see of camping sites and the fun of camping, usually have a camping pot somewhere in the picture. Eating and cooking on the trail or in a campsite is part of the joy and adventure of camping – especially using a dutch oven! Because of this, our favorite choice hands down is the Camp Chef DO-14 Pre-Seasoned Deluxe 12-Quart Dutch Oven with Lid because of its versatility, durability, and size. 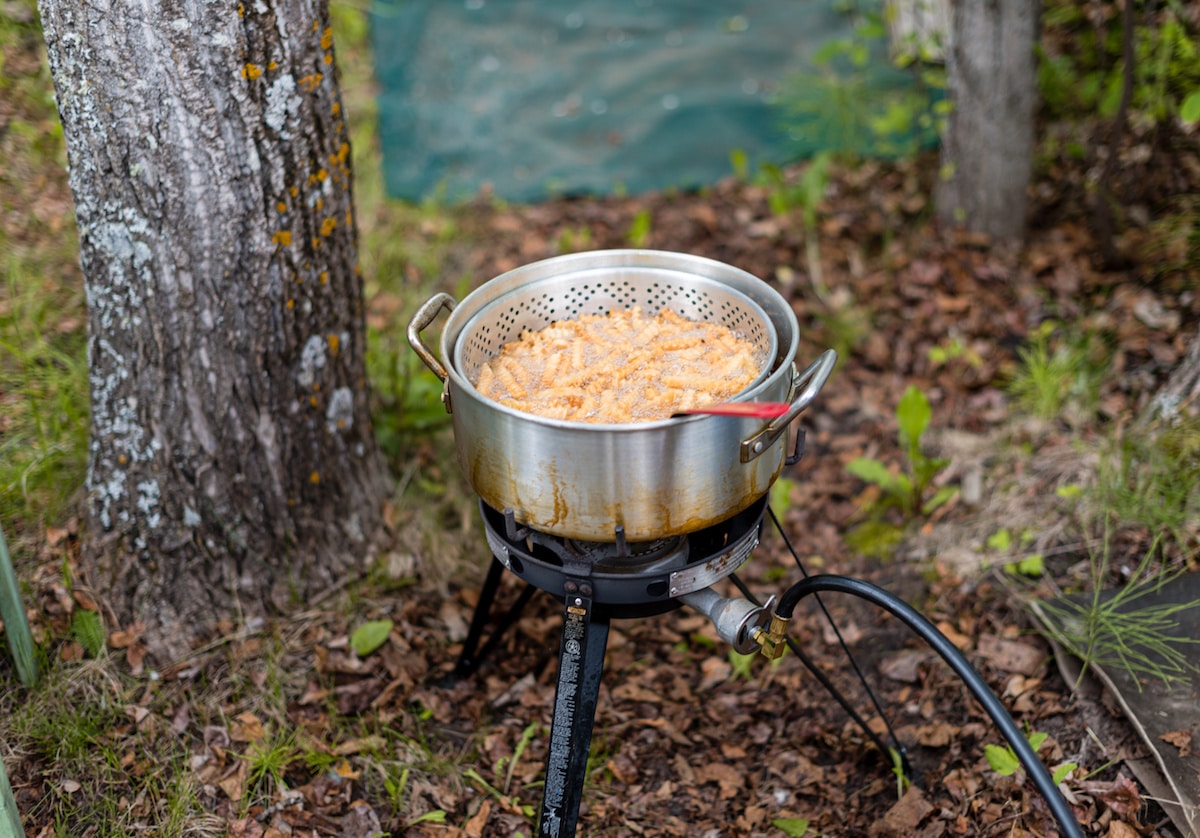 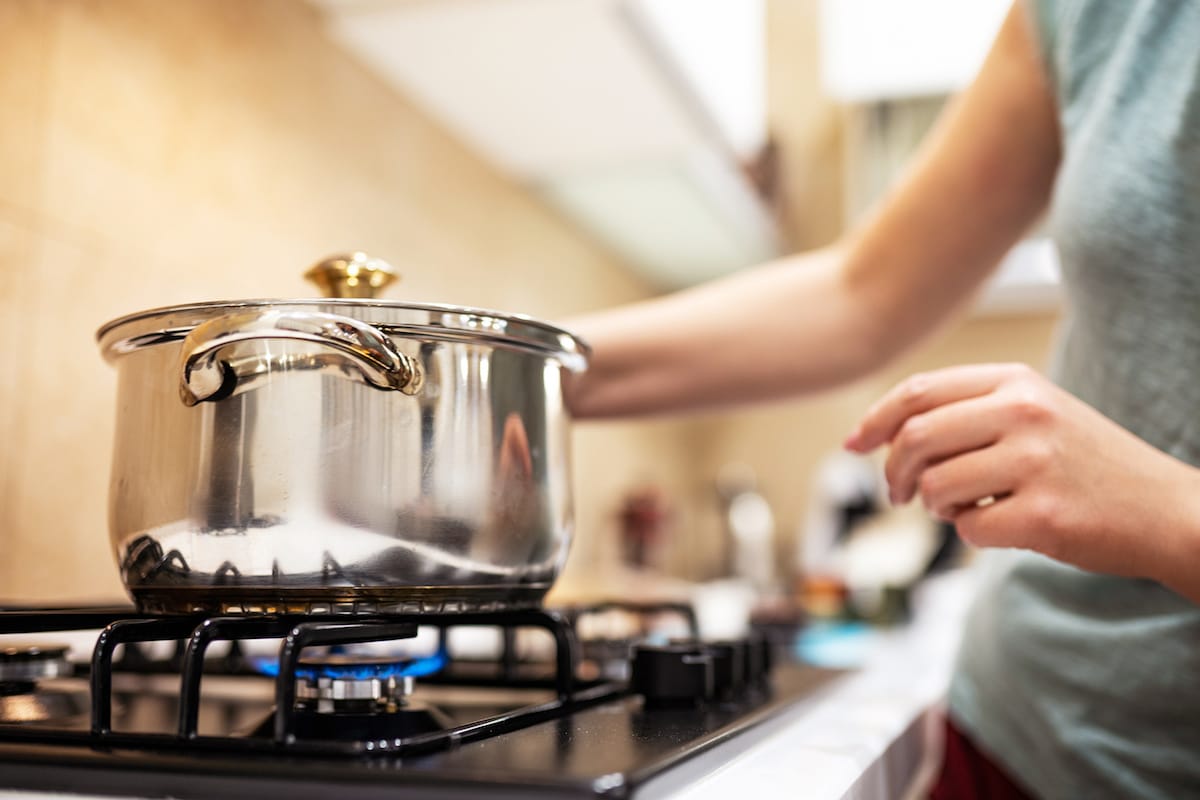 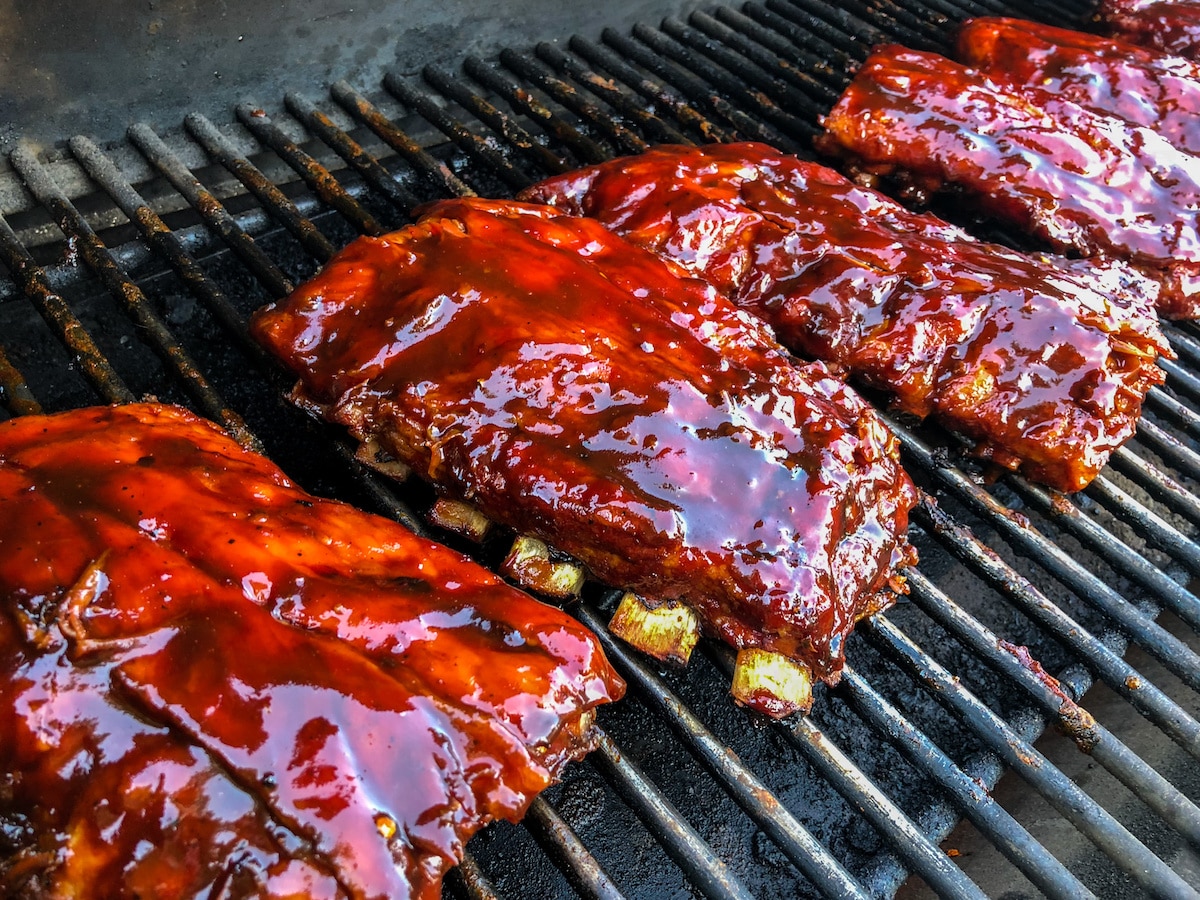